Although we are very small, we often provide sanctuary care for cats and kittens who are unadoptable due to health, medical or behavioral issues. 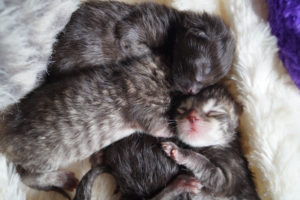 Abigail
Our journey with the “miracle babies” started when we took pregnant Genevieve into care. Her health was rapidly declining, and she needed an emergency C-section to try and save her life and the lives of her 7 unborn babies. The amazing team at Animal Hospital of Oshkosh successfully delivered all 7 babies. Sadly, two days later, Genivieve passed away; her body just could not handle what it was going through. Valley Cats volunteers bottle fed her 7 babies around the clock for weeks, and also found a surrogate mama kitty who helped feed them as well. 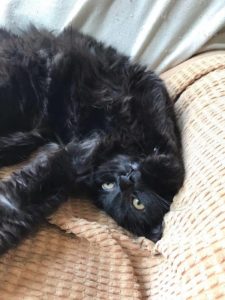 The miracle babies were not expected to survive; they were delivered 2 weeks early and did not get to nurse on their mama. But because of the dedication of our volunteers and the supplements and care they were given, the babies pulled through. Sadly, one of the babies developed megaesophagus, and was not able to eat. This is a fatal condition and she had to be put to sleep. However, the other 6 babies survived and thrived. 5 of the babies were adopted; however, Abby had some health issues that made us hold her back.

Once Abigail grew, we could tell she had some differences. She occasionally walked funny on her back legs and had some issues with her tummy. After many veterinary visits and extensive testing, it was determined that Abigail has congenital defects that affect her digestive system, that were a result of being deprived of oxygen during birth, which is extremely hard to avoid during a complicated C-section with multiple deliveries. Because of her unique health issues, she is living a happy life with a loving family in permanent sanctuary foster care.

IN LOVING MEMORY OF PAST SANCTUARY RESIDENTS: 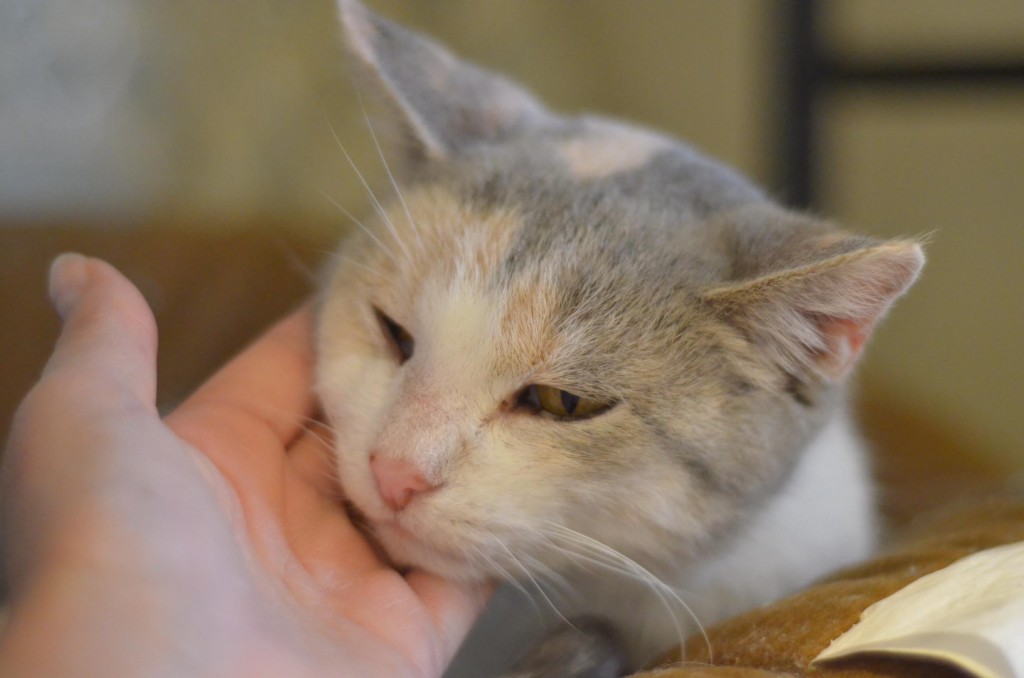 Evelyn
Our sweet
Evelyn came to us from our sister rescue, The Lost Companion out of Wild Rose. She and several other kitties had been abandoned on a foreclosed farm and left to fend for themselves.

At 16+ years old, she was a serene, calm soul who simply desired a comfortable, safe, happy place to live out the rest of her days. Her foster momma spoiled her rotten and adored snuggling with her and watching her bat around toys for the first time in her life. Evelyn stayed with us as a sanctuary kitty as she could not be spayed due to her age, and she never had to worry about raising another litter of kittens. She spent her final “golden months” with her BFF, Rowan, forming a treasured friendship. She was very much loved.

Evelyn went peacefully to heaven surrounded by love on February 12, 2016 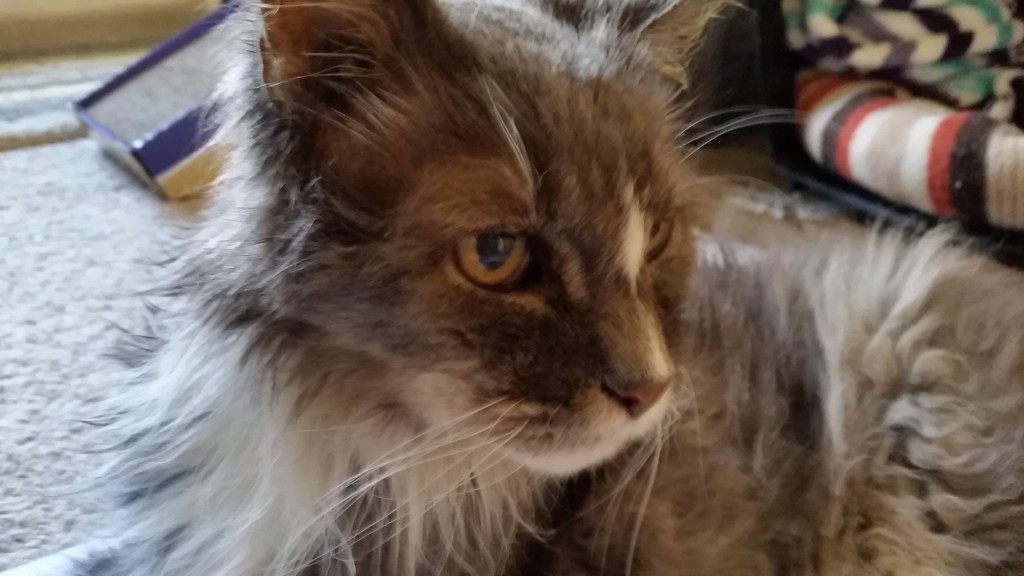 I’ll never know what hardships transpired in Rowan’s life before he came to me. I did know that he was meant to be with me the moment I gazed upon his wizened old features.  They hold such a striking intensity and depth of character despite his failing health.  I knew it would be a challenge to treat him, and it would have been easy to shy away from such an endeavor, but I felt his life deserved the honor of a graceful ending.  I have never felt such peace holding an animal to my chest, nor such fulfillment in seeing one make small daily improvements.  Rowan requires multiple medications twice daily, a special diet, and regular veterinary evaluation.  He may not have many days left with me, but I will ensure that they will be comfortable and contented. 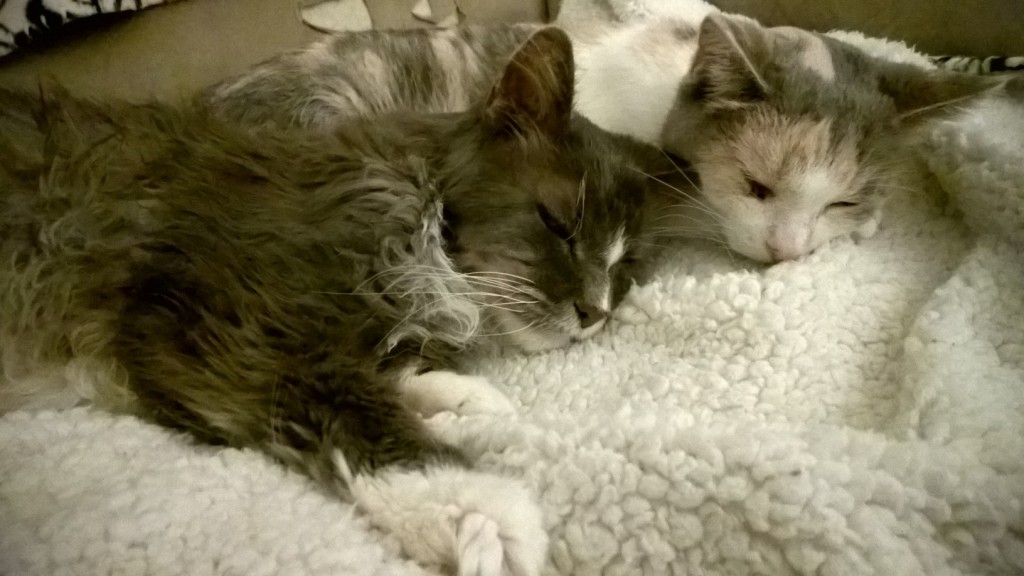 Rowan went peacefully to heaven surrounded by love on December 29, 2015 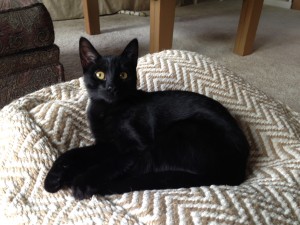 Biscuit
Biscuit came from an extremely overcrowded, high-kill shelter, along with 4 of his littermates. When the litter was scheduled for their spay and neuter surgeries, during his examination prior to surgery, the veterinarians discovered that Biscuit has a stage 4 heart murmur. Because of this, we cannot take the risk to put him under anesthesia, as he could die from it. Some kittens do grow out of heart murmurs, but little Biscuit has been rechecked twice, and there has been no improvement. We will care for him in his loving foster home as long as it takes…hopefully his heart murmur will improve and we can then neuter him and put him up for adoption; but if it does not, he will be loved unconditionally for the rest of his short life.

Biscuit went peacefully to heaven surrounded by love on September 27, 2014 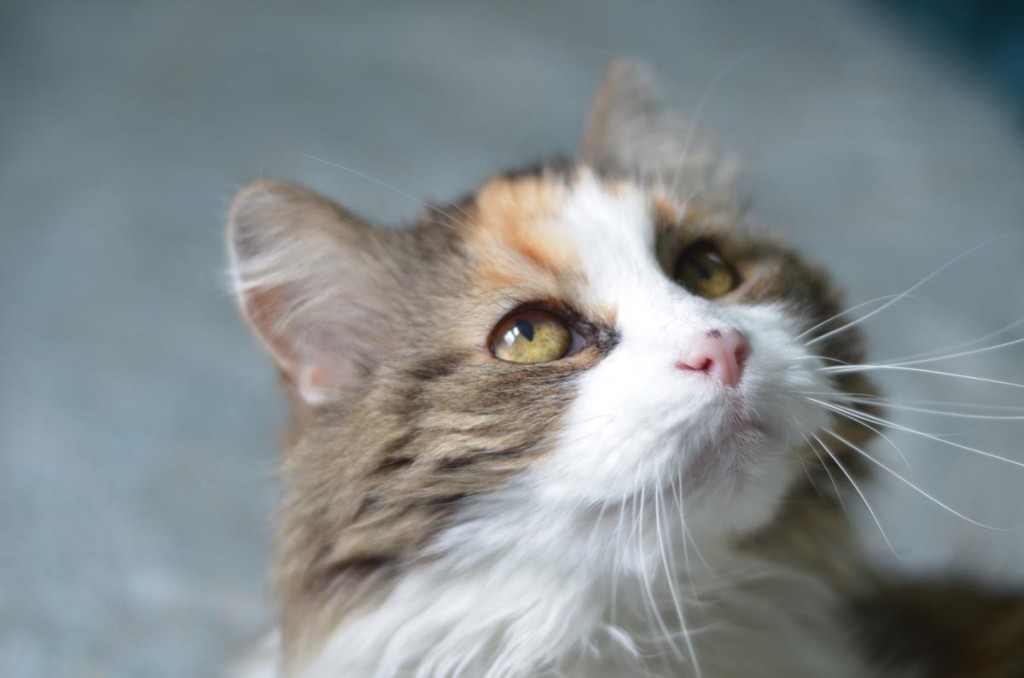 Calista
Calista spent a very long time in a local shelter. When we brought her into care, we found that she was in poor dental health, and much older than originally thought. We got her the dental care and extractions she needed, and she started to feel better. We also discovered she is deaf. Because of this, she is extremely scared of other animals. Calista is very sensitive and easily gets upset with any commotion. Recently, we also found an abscess on her stomach, and are proceeding with veterinary evaluation to give her the continuing care she needs. She is in a quiet bedroom by herself where she loves to watch the birds and rabbits outside the window, and enjoys daily affection from her foster mom.

Calista went peacefully to heaven surrounded by love on August 26, 2014 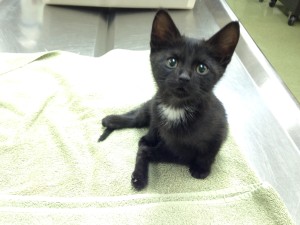 Ernie
Ernie was a very special little kitten who touched the lives of many with his amazing fighting spirit and constant unconditional love.

When Valley Cats took in Ernie from a local shelter, he was in very rough shape. He had been hit by a car and had signs of serious internal injuries. We took him immediately to the wonderful veterinary team at American Animal Hospital in Neenah, where he was x-rayed and given medications.

It was touch and go with Ernie for the entire time he was with us. He went to the vet every day for the first week he was with us, receiving critical care to empty his bladder and control his pain. He was on a regimen of medications to help him heal. He would heal, then additional problems arose and he would need to receive more critical care over the weeks we had him.

Ernie’s story touched many lives and he had a small following of supporters who helped us by spreading the word, obtaining donations for his extensive veterinary care and medications bill, and praying for his survival.

After 8 beautiful weeks of us being blessed with Ernie in our lives, Ernie continued to struggle, and upon taking him to the Fox Valley Animal Referral Center for some extensive diagnostic tests, we discovered that Ernie had never fully recovered from his internal injuries from being hit by a car, and as he grew, the injuries got worse internally, and there was nothing the highly trained veterinarians could do to save him. We kissed his head and cuddled him in our loving embrace, and said a tearful goodbye to our little fighter on September 26, 2014.

Ernie will never be forgotten. His memory lives on in our hearts and we see his spirit in the many other kittens we will save in his honor.

Some of our favorite pictures of Ernie from the short time he was with us: 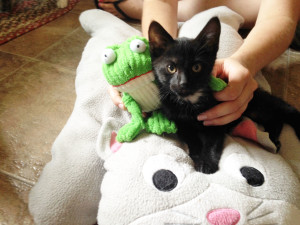 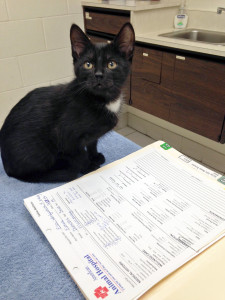 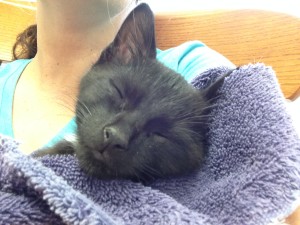 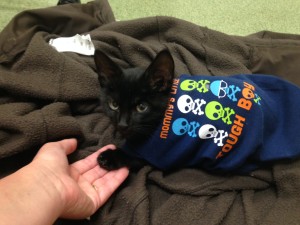 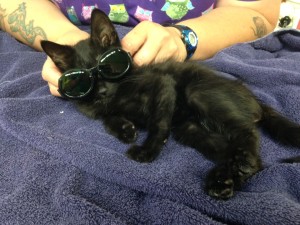 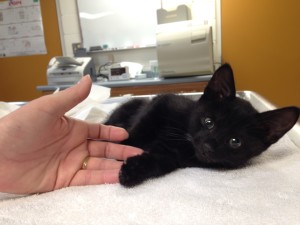 Donate to Help Us Help Them!

Just log into igive.com, choose Valley Cats as your charity, and shop their nearly 1500 online stores like Amazon, Travelocity, Overstock & more & they’ll donate a % of your purchase to Valley Cats! Log in here 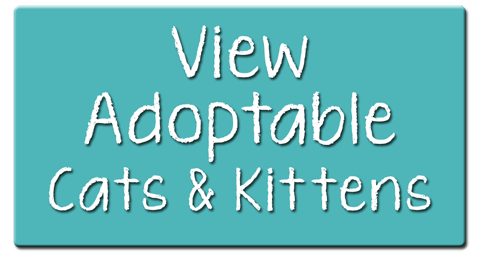 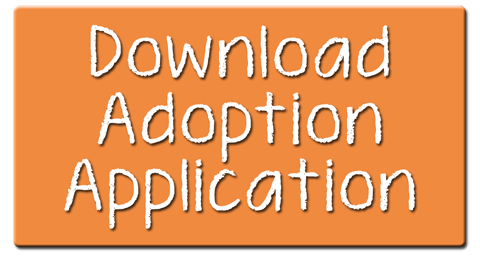